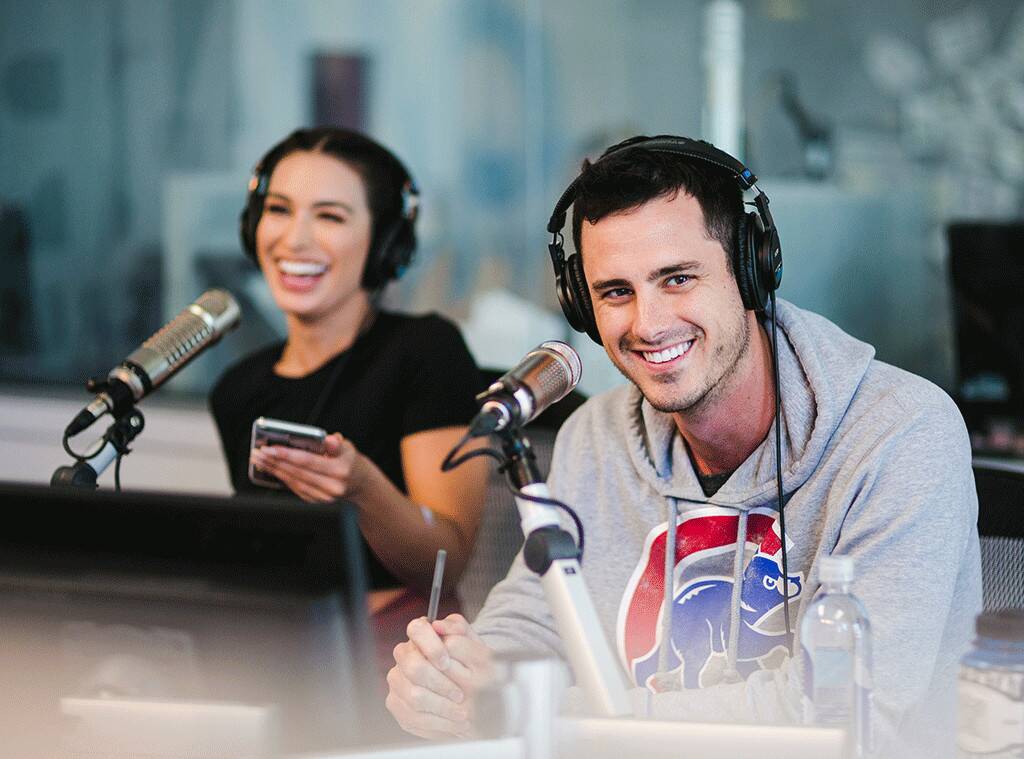 Posted at 00:01h in Podcasts, The Ben and Ashley I. Almost Famous Podcast by Iaconetti 0 Comments
1 Like

iHeart Synopsis: Ben and Ashley catch us up on all the latest bachelor news….including what’s going on with Hannah B and Tyler C down in Florida, Hannah Ann’s desire to date Tyler, and Madison’s friendship with Selena Gomez. They speculate what will happen to Clare’s season of The Bachelorette amidst the Corona Pandemic. Former Bachelor Dr. Travis Stork helps answer our COVID-19 questions. Taylor Nolan has advice on how to remain calm with what may be the most shocking idea ever. Plus! Derek Peth is live from New York.

iHeart Synopsis: Why was Peter the third Bachelor to attempt the switcheroo?! Arie Luyendyk gives his honest opinion on Peter‘s tumultuous finale and how experiencing a similar situation ended up being the best outcome for him. The founder of the “switcheroo,” Bachelor Jason Mesnick, joins us for some insight on what was likely going through Peter’s mind.

iHeart Synopsis: It’s Ben’s birthday!! Ben doesn’t know the rundown of the show so all our guests are surprises! Chris Harrison joins us in celebrating Ben and he clears up some confusion about Clare’s season of The Bachelorette and potential re-casting. Ben’s girlfriend Jess gives us the real story on how Ben is as a quarantine partner.  And we catch up with Ben’s bestie from Kaitlyn’s season, Shawn Booth! Plus all the trending Bachelor news, including Colton’s Coronavirus diagnosis and an honest attempt to figure out what’s going on with “Tannah’s” (Hannah & Tyler) Tik Toks.

iHeart Synopsis: We get a 40 minute play-by-play of Ben’s engagement day!! He tells us about all the adorable plans he made… and which ones didn’t quite pan out because of Corona. You’ll never believe what Jess thought was happening when Ben started his speech. Hint: She started crying sad tears. We get the following answers: When do they plan on getting married?? Will they move in together?? How did he get her to put on a cute outfit during quarantine? How did he figure out the ring she wanted? Plus Bachelor hot topics! What’s the latest on Tyler and Hannah?? And are Connor S and Madi dating?? What the heck is up with Peter and Kelley!? And we congratulate a Bachelor OG on her pregnancy!

iHeart Synopsis: Ben and Ashley go In-Depth with a fan favorite couple from Paradise, Hannah G. and Dylan! We find out how quarantine has tested their relationship and if there were any rough patches while they watched BIP back. Ben and Ashley ask if there was any engagement party drama with Hannah Brown, Jed, and Peter all there. Plus! Find out where they’re looking at houses and how many people will be at their wedding.

iHeart Synopsis: Peter opens about about all the questionable decisions he made along his “journey to find love.” Peter talks about his incompatibilities with Hannah Ann that led to their breakup. He discusses how he felt when Chris Harrison went to Alabama to tell Madi that Peter broke up with Hannah Ann. The former Bachelor lead chats about how much tension there was in the Weber household after his mom was so outspoken on the finale. Peter’s quarantine crush, Kelley Flannagan, comes on to talk about the serendipitous times they ran into each other off the show and the BS she calls Peter out on.

iHeart Synopsis: Hannah Ann answers lingering questions about her breakup with Peter. Does she think their engagement ended because of Madi or another girl?? How everything was kept a secret until the very end? When and how she discovered that Madi chose to leave and what she would have done if she knew prior to her proposal.  Plus, her thoughts on Peter’s DM’s with Kelley Flannagan and Hannah B. in the midst of their relationship. And a giggly response when asked about dating.

iHeart Synopsis: Ashley and Ben clarify what kind of “closet” Kelley said she was “locked in” during Peter’s season. They have an updated timeline and shooting plan for The Bachelorette production and Ben and Ashley think it may actually benefit Clare’s wellbeing. Ashley and Ben speculate if there’s any way BIP can happen this year with the predicted schedule. Ryan Neal, Listen To Your Heart’s first week standout, calls into the podcast and Ashley fangirls. He chats about his musical influences, relationship history, and the twists ahead on this season of the new Bachelor spin off.

iHeart Synopsis: On this episode, Blake discusses the post-traumatic stress he feels because of Bachelor in Paradise. He gets emotional while painting a picture of his daily life the months following the airing of the show, which included weeks of not getting out of bed. We ask him who’s DMs he would slide into from Peter’s season. Plus! We find out when he finally got closure on his breakup with Becca Kufrin and how he felt when Colton was chosen to be The Bachelor over him.

iHeart Synopsis: Bachelor Nation sleuthing has deducted that Victoria F. is quarantining with Chris Soules. It was all figured out because of a pillow and couch. Plus, find out everything about the feud between Tyler C and Jed, Jenna Cooper’s vindication thanks to forensic research and fans Venmoing Tyler C. money to put towards an engagement ring for Hannah. Listen To Your Heart Episode 2 has aired and Ben and Ashley talk to drama queen Natascha Bessez. Find out why she called out Trevor and every dirty detail on what it’s like to kiss Ryan! Kendall Long joins us for “What’s Cookin Bach Nation??” with a recipe you don’t want to miss.

iHeart Synopsis: We go in depth with the most popular Bachelor that never was: Peter Kraus. This likeable, fan favorite, never appeared on anther incarnation of the show and now he tells us why. His experience on the show deeply affected him thus changing his relationship with the franchise. We get to the bottom of what went down when he was asked to be “The Bachelor” on three separate occasions. Plus, why he was disinvited to Bachelor Winter Games at the last minute. Peter explains why he couldn’t propose to Rachel and how he felt finding out that she and Bryan were engaged days after their breakup. We hear the story of how he got involved with The Bachelorette which actually started way back in high school before he even got his first kiss.

iHeart Synopsis: Ben explains that he and Jess are sleeping in separate beds and saving sex until after marriage. We break down the Tik Tok shade Madi threw at Peter and his response. Plus, we breakdown the drama going on between Clare and Tyler Cameron’s BFF Matt James. We hear Ben and Ashley’s honest reactions to Clare’s heated Tweet about her contestants. We recap this week’s episode of “Listen to Your Heart” and get insider info from Savannah about what went down between her, Julia, and Brandon.

iHeart Synopsis: This week’s Bachelor hot topics include: Kelley & Peter making it official, Hannah Ann’s new beau Pittsburgh Steelers QB Mason Rudolph, and the new show that will be aired during the wait for Clare’s season. Ben discusses the most memorable Bachelor franchise moments he assumes will be part of the new show and Ashley speaks about what she regrets about her showdown in the Badlands. They breakdown the Listen to Your Heart drama between Julia, Brandon, Savannah, and Sheridan and praise Ryan and Natasha’s performance. Plus, Bri calls into the podcast to chat about how her love with Chris is different than any love before.

iHeart Synopsis: Chris Harrison has an unofficial update on the the future of The Bachelorette. What will happen if the show moves out of California! We’ve got some answers on why Hannah B and Tyler seem to be just friends. Plus, Kaitlyn Bristowe opens up about a difficult part of her past in which she weighed 90-something pounds and was addicted to Valium. Deandra from Peter’s season shares an easy snack recipe for another edition of “What’s Cookin Bach Nation?” We recap this week’s episode of “Listen to Your Heart” and Ben and Ashley interview Matt Ranaudo. Will Rudi join his band? How did they mend their relationship to rock “Shallow” on stage? Listen for the answers!

Episode: The Final Number with Chris and Bri

iHeart Synopsis: Ben and Ashley address the complicated issue surrounding Hannah B. We discuss Kaitlyn Bristowe’s new career as a country artist. The music will continue for winning couple Bri and Chris who join us to tell all when they spill on a potential engagement and how they’re recording their album separated in quarantine. Bri tells us which LTYH couple she hopes dates IRL. Plus Katie Morton joins us with a healthy snack recipe for “What’s Cookin Bach Nation?”

iHeart Synopsis: Caelynn Miller Keyes opens up about the virus she had as a child that could have paralyzed her and how beauty pageants helped prepare her for the scrutiny and pressure that would come from being on The Bachelor. She discusses why she thinks her friendship went south with Hannah B. before Colton’s season. Caelynn admits to the disappointment she felt to be passed over for The Bachelorette and the move she made during Women Tell All she hoped would make all the difference securing that title. Plus! Get an inside look at her life exploring the world with Dean and find out why their wearing wedding bands.

Episode: Stand Up and Speak Together

iHeart Synopsis: Ben and Ashley reflect on the tense and upsetting events of the last week and how they feel witnessing demonstrations and protests across the country. Ben has been criticized for not giving his personal strong opinion and speaking his mind, and today, he addresses that. Keltie Knight from The Lady Gang shares what she’s learned about herself and the world since the turmoil. And we hear some stories from her days on “The Bachelor”. Did you even know she was on The Bachelor?! Plus, we talk to a former Bachelor contestant Kristy Katzmann about her search for a relationship…and good sperm… on Fox’s “Labor of Love”.