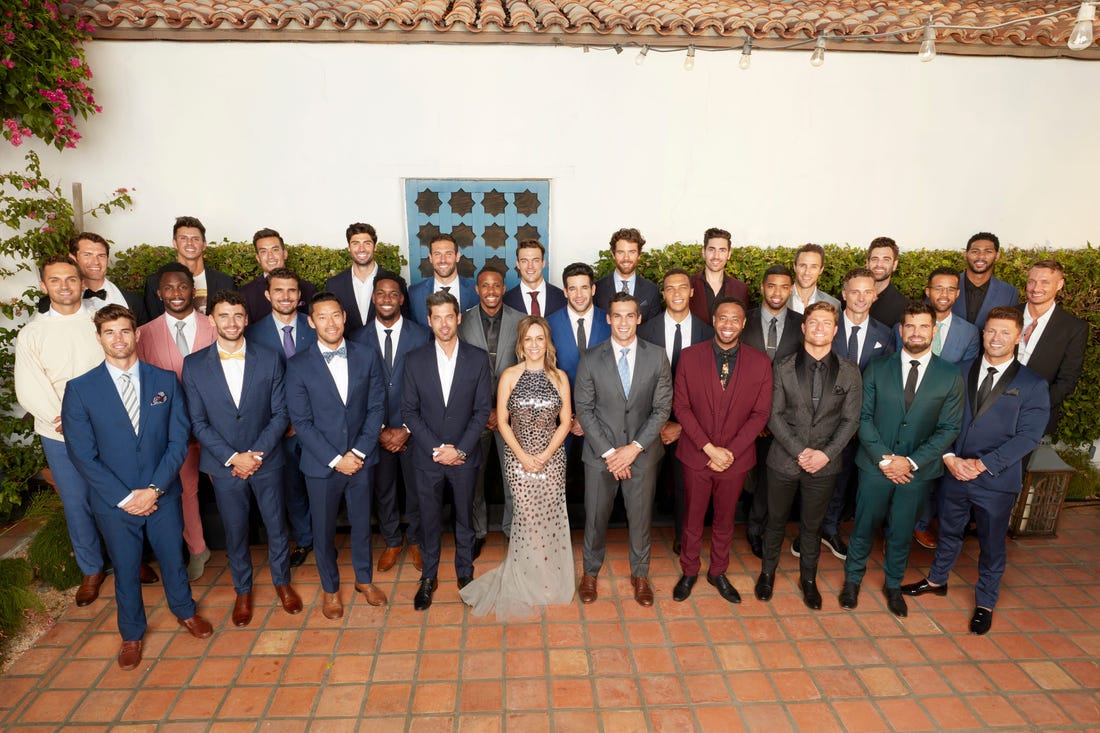 Posted at 02:46h in Access Hollywood, As Seen On TV, Podcasts, The Ben and Ashley I. Almost Famous Podcast by Iaconetti 0 Comments
0 Likes

iHeart Synopsis: Ashley explains her feelings on “love at first sight.” Did Clare experience it with Dale? Ben and Ashley discuss who else stood out to them on Night #1. Robert Graham tells us what’s going on between him and Kristina Schulman. Kelsey and Mykenna from Peter’s season open up about the show’s effect on their mental health. Mykenna explains why she’s not watching Clare’s season. Plus, all the tea on Krystal Nielsen’s new relationship and what Luke Parker faces for breaking his contract!

Cosmopolitan Article: “Love At First Sight” and Why This Season is Different.

iHeart Synopsis: Was Ashley & JP Rosenbaum’s split due to differing politics? Grocery Store Joe shares his thoughts on the shocking split by revealing personal insights about his breakup with Kendall. Is it ever just one thing that breaks a couple up? Was it really just about which city to live in for him. Plus! Joe talks about his dating life and breaking quarantine for Kendall. One of Clare’s closest friends, Michelle Money breaks down this week’s Bachelorette episode with Ben and Ashley. Why did no one steal Clare during group date #1?? Was she too dramatic in that moment? They talk about double standards in regards to the naked dodgeball date. Of course, the group discusses Brandon’s cringe exit.

iHeart Synopsis: Tayshia makes her entrance like a mermaid?! Actress Marika Domińczyk is a MAJOR Bachelor fan and she and her husband Scott Foley help Ben and Ashley recap this week’s episode of The Bachelorette! We give honest thoughts on: Clare’s focus on Dale, how she eliminated Zach, the unusual happenings at group dates, and how Tayshia will be as a “replacement Bachelorette.” Ben and Ashley get major life updates from Bachelor “villain” to bride and mom, Courtney Robertson!

iHeart Synopsis: You know Benoit Beausejour-Savard from Bachelor Canada, Bachelor Winter Games, BIP and as Clare Crawley’s ex fiancé! Ben and Ashley go IN DEPTH with Benoit as he opens up about his “love at first sight moment” with Clare. Find out the TRUE reason their relationship fell apart and why their engagement wasn’t acknowledged at the start of Clare’s season. He explains why he thinks the scene he filmed with Clare for her season didn’t air. Plus, Beniot reveals the differences between “TV Clare” and the REAL Clare.

Cosmopolitan Article: Was Yosef Trying To Be A Villain?

iHeart Synopsis: Ben and Ashley connect with one of Clare’s closest friends, former Bachelorette Deanna Stagliano. She explains why the date she was supposed to be part of was cancelled. Plus, Deanna reveals what she knows of Clare and Dale’s emotions today. Blake Hortsmann reveals the truth about his relationship with Becca Kufrin and his thoughts on Garrett’s new girlfriend.

Almost Famous Episode (Friday): Love is in the Clare

iHeart Synopsis: Ben and Ashley bring in the BIG DADDY, Chris Harrison, to break it all down all the decisions made during Clare’s final episode as Bachelorette. Chris clarifies when Tayshia was chosen as Clare’s replacement. He feels like Rob Mills got this moment wrong when he chatted with Nick Viall last week. Chris addresses the rumors that this whole switcheroo was planned from the start. Plus, Chris reveals if there have been any other Bachelor leads that secretly picked their person mentally on night #1.

Cosmopolitan Article: The One We’ve Been Waiting For

iHeart Synopsis: Ben and Ashley dig in to the first official episode of Tayshia’s season and we get their unfiltered reaction to Tayshia’s new guys…and guys whose names we didn’t know previously, like her early connection, Brendon. Plus, just how bad is Spencer gonna suck?We hear about the date Jared and Ashley hosted. We break down Clare &. Dale’s sit down with Harrison. Are we they on different pages about marriage and babies?

Cosmopolitan Article: Ah, And We Have Our Villain

iHeart Synopsis: Ben and Ashley talk to Bibiana Julian and get her to spill EVERYTHING about her new boyfriend. Life after The Bachelor hasn’t been easy for Bibi and she opens up about her struggles with mental health since appearing on the show. Kendall Long hops on to help break down this week’s episode of Tayshia’s season! Who looked worse? Ed or Chasen? How can Noah evolve into a villain? Where did Bennett f-up? Is Tayshia’s fave, Ben, feeling himself too much? We talk about it all.

iHeart Synopsis: Ben and Ashley are hosting Bachelor Nation and they saved you a seat at the table! Krystal Nielsen gives us her first interview since she announced her pregnancy! She discusses her difficult first trimester. And get the inside scoop on when and how she met her new boyfriend! Wells Adams, Ben Flajnik and Chris Soules join in for some Thanksgiving recipes and plenty of Bachelor gossip too! Ashley awkwardly and hilariously talks to her former Bachelor about meat…

Cosmopolitan Article: What It Was Like To Judge The Grown Man Competition

iHeart Synopsis: Bachelor royalty and Mirrorball Champion Melissa Rycroft help Ben and Ashley break down Kaitlyn Bristowe’s historic Dancing with the Stars win! She has some inside info on why Kaitlyn didn’t compete on DWTS after her season of The Bachelorette! Melissa sticks around to recap this week’s episode of Tayshia’s season. Bennett is such a character on the show, but does he have a shot at becoming a REAL option for Tayshia. They breakdown why Ivan’s one-on-one date was the kind that needs to be done more often on the show. Is Dale CHEATING on Clare?? We go through the facts and try to figure out what’s going on.

iHeart Synopsis: Ben and Ashley are live on the Stereo app and answering all your questions! This is unedited, unfiltered and raw with no question off-limits. They answer everything from their favorite Christmas song to areas of the Bachelor Mansion that are never shown on TV to The Bachelor cast alum who still deserves to be the lead one day. Plus, Ben reveals an intimate secret about his fiancé!

iHeart Synopsis: Ashley has a serious boy band fan girl moment with Kenny (the boy band manager) from Clare’s/Tayshia’s season. He spills some TOP SECRET dirt from inside the Bachlorette bubble, like the truth about Bennett’s personality. We hear how the guys reacted to the transition from Clare to Tayshia. We catch up with the new DWTS Mirrorball champion Kaitlyn Bristowe! Find out how Jason treated her after practices and the REAL injuries she sustained while training.

Cosmopolitan Article: Things Are Getting Serious

iHeart Synopsis: Entertainment Tonight host and Chris Harrison’s girlfriend, Lauren Zima, co-hosts this episode with Ashley. Lauren reveals all the details of her first date with Chris and his most romantic moves. And yes, he sends her roses and they’re more over the top than what the Bachelors give out. Chris joins the episode and discusses how they avoid a conflict of interest in their relationship. (Journalist vs. show producer and host.) Ashley and Lauren breakdown the episode, including Ben’s depression and Riley’s family matters.

iHeart Synopsis: Madison spends her time with Ben and Ashley discussing her life post-Bachelor. She hints at dating a certain someone and discusses how it’s different to date as someone saving herself for marriage. Plus! Find out why she loves giving people goats for Christmas.

iHeart Synopsis: Ashley hilariously misinterprets Chris Harrison’s tease that the end of this season will be “rocky.” Ashley’s dad weighs in on why Bennett was asked to go through the rose ceremony just to be sent home again. Ben and Ashley discuss the mini Men All All, including Yosef being gross,  Riley’s relief, and Chasen’s absence.

iHeart Synopsis: Blake joins the podcast and explains why he sculpted a penis during a group date, what he felt when he slid into Clare’s DMs pre-show, and how he got so far in the competition. Ben and Ashley gush over the families Tayshia met during the hometown dates. Plus! Ashley explains why she thinks it’s a good thing that Ben (Smith) was sent home.

Cosmopolitan Article: Hometowns…Or Whatever You Want To Call Them

iHeart Synopsis: Why did Tayshia say she thought Brandan was the one after saying I love you so gleefully to Zac? Ben and Ashley try to figure out what no After The Final Rose could indicate for Tayshia’s relationship status. Plus! Why did Ivan get stuck with such a shitty date activity?

iHeart Synopsis: It’s a big geek out as Ashley & Ben swoon over Tayshia and Zac’s engagement, the first Bachelor ending in a while that comes with no reservations. Brandan joins us to explain how he felt watching back his departure. His best friend from the show, Joe Park, calls in to discuss who has slid into his DMs, including Bachelor producers. Plus! Bachelor headlines including why their was no After The Final Rose and Carly & Evan’s breakup. 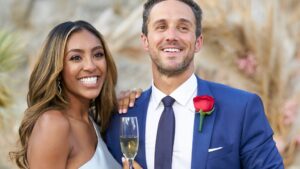 iHeart Synopsis: Tayshia reveals what she would have done if Brendan didn’t leave and Ben didn’t come back. She discusses how she felt about Zac on her night one and when she knew he was the one. Plus! Did her parents ever say they preferred Zac to Ben during their visit? Ashley also explains to Tayshia how nervous she was over a text she sent her.

If you want to share your thoughts or have questions you’d like to be answered on the podcast, email benandashley@iheartmedia.com or rate us on iTunes HERE. The Almost Famous Podcast airs every Tuesday during the 2020 Bachelorette Season and Almost Famous: In-Depth will be released on an occasional basis. Listen and Subscribe on the iHeart Radio App or on iTunes.